The 1939 film, The Wizard of Oz is the source for a number of famous quotes prominent in popular culture today, the title of this blog being one such reference.  My use of the word ‘space’ instead of the original ‘place’ is an intertextual nod to cultural theorists such as Bachelard, Lefebvre, De Certeau, Foucault and Soja for whom space and place are not separate, but different forms of the one thing.  Having walked the city, visited traumascapes and lived as flaneur through this semester’s course on Producing Culture, space, whether it’s perceived, conceived or constructed holds a compelling allure.  This blog is an engagement spawned by intellectual curiosity with the theories of those previously mentioned to explore the different forms of space whereby (in terms of this being the last assessment) space really is ‘the final frontier’.

Throughout this blog you will find many references to The Wizard of Oz. This is by no means an attempt at interpreting Frank Baum’s work, they are simple literary devices, employed in a way that is meaningful to me.  I have also given each theorist their own space, so to speak, by creating a separate page for each one (just follow the links at the top of the page).  It is on these pages that I have explored their work from an academic perspective, briefly (it’s by no means exhaustive) outlining the important ideas, similarities and differences I found in their work on spatial theory. On this page however I have explored and combined elements of interest and culture that I think are relative to each theorist with my own artistic representations of their work, created with photo manipulation software in Polyvore.  For ease of reading and space I have not included in-text referencing, however a full list of sources is given on the reference page. Where images besides my own have been used a hyperlink to their source has been added. 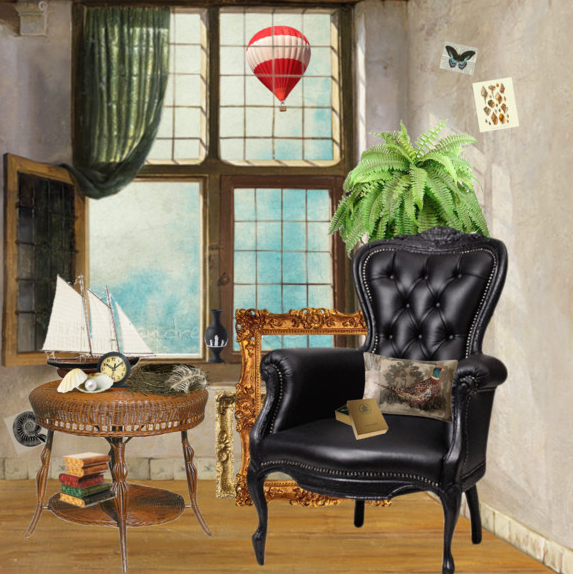 Nests and shells according to Bachelard are among the oldest and most familiar image symbols known to man .  The nest in its most basic structure represents our human instinct and endevor to construct and provide shelter for our own.  The shell by way of ancient mythology represents the human in its entirety as body and soul, the outer shell the physical flesh, and the inner mollusc the soul.  Both images are representative of the home either for the body or for the soul which is why I have combined them within a scene of domestic life, so central to Bachelard’s work.  Nest and Shells is both dreamy and nostalgic, criticisms made of Bachelard, but something for which I think we still yearn.

The above picture is an overhead shot taken of different surburban neighbourhoods revealing the deviations from the established paths taken by the residents as they make their way through their local spaces. Gaston Bachelard called these ‘Desire Paths’,

“A desire path is a path created by usage, not a pre-determined path. Normally these paths are created by people taking shortcuts across fields to get from point A to point B more quickly”.  Gaston Bachelard

Departing from the predetermined path embodies much of Bachelard’s ideas in the Poetics of Space.  Although an established path of science knowledge and rationality has been laid down it may not provide the best way to reach a goal or destination and may ultimately become confining and limiting.  For Bachelard, allowing the familiar to inspire the new daydream opens up other possibilities.

It’s in branching off the established path and creatively following your own footsteps that new ways are discovered and new ground covered.  Although it is true that new paths soon become inscribed behind us, they still serve as a valuable reminder to look beyond the familiar.  Many of the theorists I have explored in this space started down the pathways inscribed by their fellow theorists only to deviate at some point to follow ‘their desire’ and in doing so creating  new paths.

Chronotopia represents the many faces of time and space with particular reference to The Wizard of Oz as a chronotope of fantasy/fairytale, combined and slightly transmuted with imagery from another significant contribution to popular culture, the original time lord himself, Dr Who.  The intertextual combination of both genres opens up possibilities for new  and different stories and journeys.

Bahktin’s notion of Carnivalesque is a form of heterotopia similar to Foucault’s. Bahktin conceived of this hetertopia from his study of the writings of Rabelais and his descriptions of medieval festivals.  He reveals the carnivalesque as a way in which laughter, and the mocking of authority, inverted civil and religious traditions through the celebration of idleness, drunkeness and debauchery. During these festivities there is a momentary disruption of hierarchical distinctions and barriers, norms and customs, ofﬁcial ordering of time and space, and all forms of political coercion.

Carnivalesque  creates a space that is both temporary and illusory, yet Bahktin believes it was encouraged by the hierarchy as a means to let the peasants blow off steam, quelling any hint of rebellion.  While I have concentrated on Bahktin’s work on the chronotope I am intrigued by how a form of carnivalesque may still endure today through our use of chat room and virtual worlds on the internet.  These virtual spaces displace the everyday in all it’s forms, and through the use of avatars and sim characters we can be whomever we want to be and act accordingly.   As the stress levels and the pressures of modern society rise, academics are finding people are spending more and more time online in an effort to ‘escape’. If carnivalesque is a true theory then it poses important questions about who is benefitting, who is being pacified, and why.

The  Truth of Space – Digital Image by Vicki Weetman 2012

The ‘truth of space’ is a direct contrast to ‘true space’ as conceived by the structures of power.  It is thoroughly diverse and resistant to a homegenising culture.  With this in mind, I have constructed The Truth of Space, fusing together the trialectic of social, mental and physical space, yet in a way that challenges the homogenised versions of a picnic in the woods.

Lefebvre saw commodification infiltrating every aspect of our lives, particularly how we live in our urban spaces.   Street art has long been the domain for a form of resistance to, and communication of, culturally relevant themes. By taking their art into the street, street artists create an easily accessible and powerful platform through which to express ideas. Usually street art contains messages of subversion or a call to social action, but whatever their motivation, artists are also challenging the knowledges of power regarding the ownership, use and aesthetic of public spaces. Often art created by street artists becomes so identifiable that it is appropriated for commercial use….profit from protest, underscoring perfectly, perhaps, Lefebvre’s point.

As previously mentioned, it is Gaston Bachelard who speaks of ‘Desire Paths’ in his book The Poetics of Space, yet I found strong similarities to this idea and the textual approach used by de Certeau in his spatial theory and so have incorporated it in this image.   For de Certeau it is the ‘walker’ who through storytelling imagines a way to make their spaces meaningful, creating a second ‘metaphorical’ geography over the existing geography, and its concurrent ‘other’ meaning.

Cyberpunk is a genre that is receiving increasing academic interrogation, particularly around the representation of the urban cities central to the Cyberpunk settings. The near future setting of Cyberpunk stories and the portrayal of the urban landscape which closely follows current formal urban theory inspires academic conjecture about what our own future urban spaces may look like.

“Cyberpunk’s virtual and urban grid-like spaces are ordered by a Foucauldian logic of the panoptic and social control. They also resonate strongly with de Certeau’s idea of an abstract ‘place’ or Concept-city governed and shaped by powerful interests rather than the needs and lives of its users. This impulse shares much with de Certeau’s formulation of everyday spatial practices as tactics, as everyday arts of ‘making do’. As tactics, these ways of operating manipulate and divert those spaces organised and imposed by strategies that seek to create places out of abstract models.” (Natalie Collie).

Since Sci Fi has been the inspiration for many of the technologies that we see today, it’s not hard to imagine that this newest genre of science fiction/ fantasy could  also provide a frame by which we can prefigure social theory.

William Gibson is one of the pre-eminent writers of Cyberpunk fiction.  His short film No Maps For These Territories , expresses a poetic and textual approach to space as conceived by Michel de Certeau and is both beautiful and thought provoking,  This is the ending sequence to the movie.