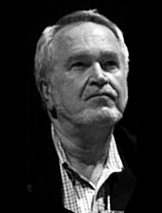 Edward Soja is an urban planner, postmodern political geographer and cultural theorist.  His spatial theory called ‘Thirdspace’ is largely an extension of the work of Henri Lefebvre and is focused within the field of cultural geography. Soja employs a trialactic of space where space is spatiality, sociality and history. This is the space, Soja contends, where everything comes together. For Soja, modernism emphasized history at the expense of geography. Thirdspace according to Soja is a way of ‘thinking about and interpreting socially produced space’, where the spatiality of our lives, our human geography, has the same scope and signifigance as the social and historical dimensions.

By employing a critique of Marxist theories of geography, Soja conceived the notion that geography shapes class as much as class shapes geography, and the previous modern focus on the relation of history and society for cultural study has, from a postmodern perspective, been insufficient. Soja challenges the former dialectic dominant in spatial theory, of things in and thoughts about space, by introducing the third and equally important concept of a ‘fully lived space’.

“Rather than an actual force in the shaping of society and theory, space became “a reflective mirror of societal modernization” Edward Soja

* Firstspace is the ‘real’ space – the urban built form of physical buildings that can be mapped and seen.

* Secondspace is the ‘imagined’ representational space – i.e. how the space is perceived, seen and argued over. In urban settings this would be evident through, for example, the role of marketing and redevelopment projects.

* Thirdspace takes this thinking further – it combines First and Second space to create what Soja describes as, ‘a fully lived space, a simultaneously real-and-imagined, actual-and-virtual locus of structured individuality and collective experience and agency’

Thirdspace, then, is the experience of life in the Firstspace mediated through Secondspace expectations.